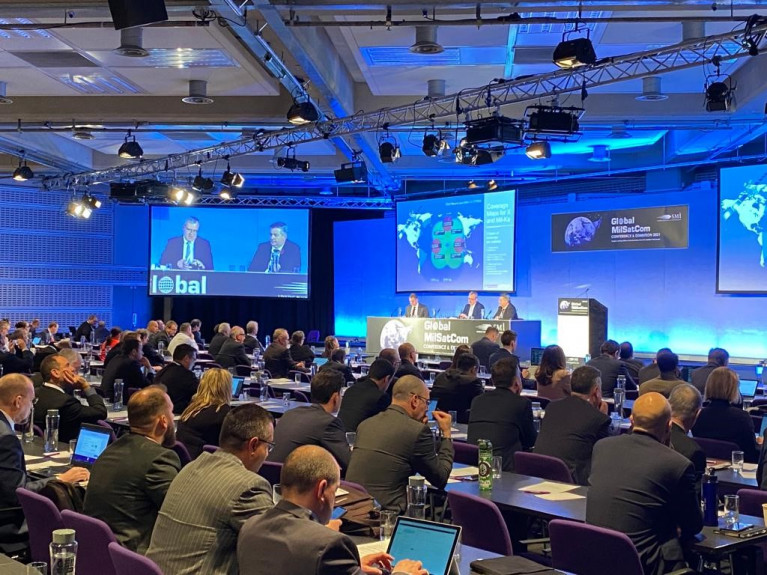 This week at Global Milsatcom, we shared the stage with our partner Telespazio to jointly communicate our partnership for SYRACUSE IV Valorisation since the successful launch of the Syracuse 4A satellite on October 24th.

Airbus and Telespazio two world leaders in satellite services have joined forces to sell capacities on Syracuse IV system. The two companies ensure availability of these capacities to military users while the services operation is performed by a dedicated entity « Airbus Telespazio Capacity Operator ».

With this partnership, we will be able to sell Syracuse 4 satellite capacity and various high-added-value services such as anchor capacity, end-to-end services with capacity and throughput guarantees, engineering and maintenance services. This partnership will deliver flexibility to worldwide Armed Forces.

Syracuse IV is a telecommunication system owned by the French MoD consisting of a ground system and two military satellites, Syracuse 4A and 4B over a broad area ranging from the Caribbean to the Straits of Malacca. These new-generation satellites will be the first to offer a completely flexible reconfiguration of the X‑ and Ka-band military payload.

These services will be accessible over a broad area ranging from French Guiana to the Straits of Malacca and will be deployed for maritime, terrestrial and air uses.  Allied forces will thus have access to communication capacity in X-band, military Ka-band and X/Ka dual-band mode, offering unique flexibility while benefiting from the highest levels of protection and hardening provided for in the NATO standards. Their units deployed in the field will be able to exchange video, voice and data via all-IP (Internet Protocol) communications at rates of up to several hundred Mbit/s. The satellites could be compatible with all military graded (WGS, Skynet…) types of terminals (on the move, on the move land, aero and maritime).