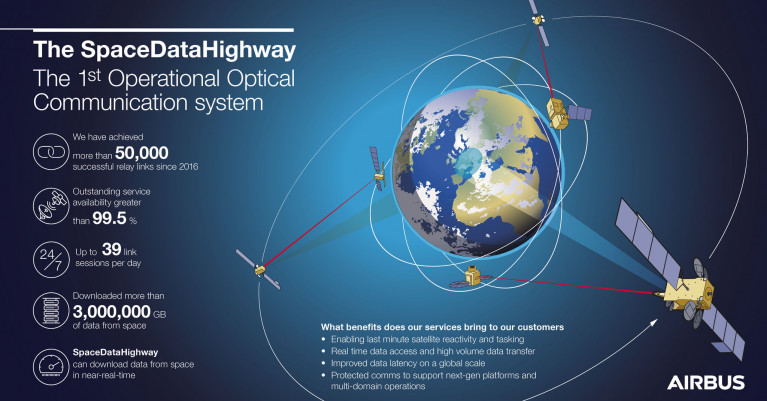 The SpaceDataHighway– the world’s first operational optical communication system - based on cutting-edge laser technology – has achieved the milestone of 50,000 successful laser connections. During the first five years of routine operations these successful connections have downloaded more than 3.0 Petabytes of data and have a service availability rate of >99.7% in 2021.

The SpaceDataHighway is a public-private partnership between the European Space Agency and Airbus, which owns and operates the system, taking full advantage of the laser communication terminals developed by Tesat-Spacecom in cooperation with the DLR German Space Administration. SpaceDataHighway enables the transfer of data (including imagery, voice and video) from LEO satellites and airborne platforms, by laser communications via the EDRS-A and EDRS-C geostationary satellites, to receiving ground stations across Europe.

It represents a game changer in the speed of space communications, using cutting-edge laser technology to deliver secure data transfer services at a rate of up to 1.8 Gbit/s in near-real time. Our system relays data from Low Earth Orbit Earth Observation satellites moving at a speed of 26000km/h at 700km altitude via our two geostationary satellites at 36000km to the ground.

The system’s satellites are designed to lock on to low-orbiting satellites via laser and collect their data as they travel in low Earth orbit scanning the Earth. From its position in geostationary orbit, the SpaceDataHighway acts as a relay, transmitting the large quantities of data acquired by these observation satellites down to Earth in near-real time at a speed of up to 1.8 Gbit/s, instead of storing the data on board until the satellites pass over their own ground station.

We can download 230GB of data in a typical link session which lasts around 18 mins on average –the SpaceDataHighway is capable to relay up to 40 terabytes of data acquired by observation satellites, aircraft, unmanned aerial vehicles and other mobile assets, to Earth which is the equivalent of streaming more than 400,000 MP3 songs per day.

The establishment of the laser connections is controlled by the SpaceDataHighway’s Mission Operation Centre which operates 24 hours a day, seven days a week at Airbus premises near Munich. Operators receive transmission requests from customers, programme the space and ground segment and monitor the performance of communications.

Preparing for the future

The service is currently used by the European Commission’s Earth Observation Copernicus programme. Airbus is serving the connectivity needs of the four Sentinel 1 & 2 satellites and is relaying around 40% of the total data of these satellites via SpaceDataHighway. The service has significantly accelerated the delivery of large volumes of data to Earth monitoring centres. With the successful commissioning of the second satellite EDRS-C, SpaceDataHighway has doubled capacity. Airbus is now expanding the SpaceDataHighway service to more customers and is targeting to at least triple the number of LEO satellites served with the current system by 2030.

Pleiades Neo, Airbus’s most advanced optical Earth Observation constellation with four 30cm resolution satellites will be the next satellites to benefit from SpaceDataHighway’s infrastructure and will further optimise mission reactivity providing Near Real Time data delivery and rapid tasking. From later this year, the system will also relay information from the Columbus module of the International Space Station (ISS) via the Columbus Ka-band (ColKa) service, bringing enormous benefits to both astronauts and also scientists and researchers across Europe by enabling them to progress vital research faster.

Airbus is also developing user terminals to enable new applications. Recently, with the Netherlands' organisation for applied scientific research TNO, Airbus has launched the UltraAir programme to develop a laser communication terminal demonstrator for airborne platforms. This new programme is a key milestone in the roadmap of Airbus’s overall strategy to drive laser communications further, which will accelerate the benefits of this technology as a key differentiator for providing Multi-Domain collaboration for our government and defence customers.