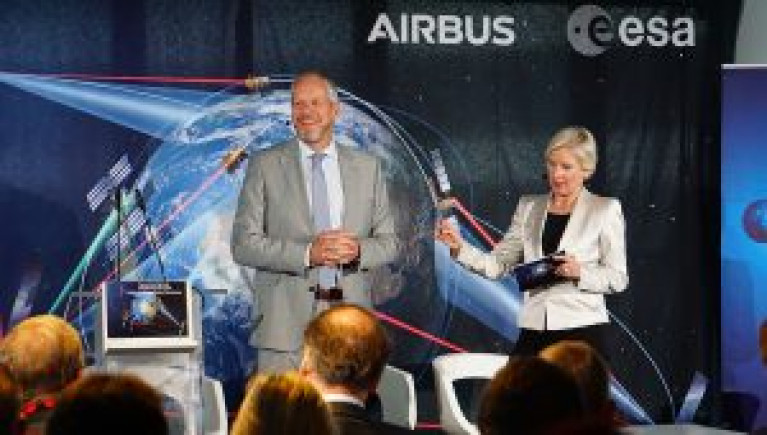 A Sentinel satellite is taking an image to identify dark vessels and potential oil spills and making this time-critical information available in almost real time to users thanks to the European Data Relay System (EDRS). This highly valuable capability has been successfully showcased during a live demonstration held at the headquarters of the European External Action Service in Brussels on 10 July.&nbsp;

“This event marks the first official live demonstration of this globally unique data relay capability based on cutting-edge laser technology able to send data over distances of 40.000km at 1.8Gbps. Connected via a live stream with the EU delegation in Tokyo, this event also allowed invited Japanese industries and institutional representatives to follow our live link session during a parallel event organized by Airbus and its business partner JSAT.” explained Mathias Schneidereit, leading the EDRS market development activities at Airbus.

Dubbed the “SpaceDataHighway” service, the EDRS infrastructure enables Earth-observation satellites to deliver their information to users on the ground in near real-time, accelerating responses to emergency situations and spurring the development of new services and products.

The system works by using highly precise lasers to speed up the data relay of imagery from Low Earth orbiting satellites. Without EDRS, these satellites can only dump their information when they are in direct line-of-sight with a ground station, which happens on average only every 90 minutes. With EDRS, they send their data through space via a laser link to telecommunication satellites in a higher, geostationary orbit that have a constant view of a ground station.

Delegates at the meeting watched staff from theEuropean Maritime Safety Agency (EMSA) analyse images of ships off the coast of French Guiana that were captured just seconds earlier by an Earth-observation satellite called Sentinel-1B as it orbited the planet.

The team was able to pinpoint more than 40 individual ships on a 60,000 square kilometre patch of the Atlantic Ocean that was twice the size of Belgium. They even checked the ships’ wakes for any evidence of oil spills – and found none on this occasion. The whole process took approximately 10 minutes until the image was shown live in Brussels and Tokyo.

EDRS is a public–private partnership between ESA and Airbus, with significant investment by the German Space Administration DLR. Besides the first long term customer Copernicus, the SpaceDataHighway data relay services will be used by Pleiades NEOfrom 2020 onwards.

Evert Dudok, Executive Vice-President at Airbus, said: “The SpaceDataHighway and the EDRS service is a unique European capability. What we have to do now is stay ahead on the technology and identify strong partners internationally in the US and in Japan.”

Pierre Delsaux, Deputy Director General at the European Commission, said: "We need EDRS for our satellites and therefore this unique service for fast data access should be made available everywhere in the world."

Josef Aschbacher, Director of Earth Observation at ESA, said: "EDRS is a strategic asset with capabilities like secured data transmission which is of clear value to Earth observation satellite missions."