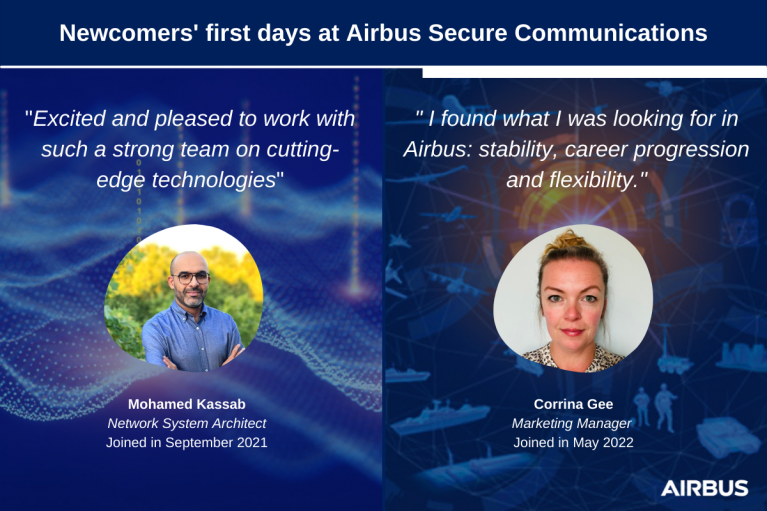 Airbus Secure Communications is mostly located in France, Germany, the United Kingdom, Norway and North Macedonia, with around 70 open positions available on our sites. Always looking for new talents, we value our employees' well-being. With many newcomers joining us those past few months, new innovative talents are taking part in the challenging adventure with new ideas coming along.

Corrina Gee, Marketing Manager and Mohamed Kassab, Network System Architect are two newcomers who have recently joined us. In this article, they share their impressions about their first days within our organisation.

Mohamed Kassab, Network System Architect based in Elancourt, joined Airbus in September 2021. Before Airbus, he had 15 years’ experience as researcher on computer networking in several academic institutions in France and Tunisia. He decided to join Airbus because he wanted to work in the industrial part of network communications, closer to the end users, in innovative projects. His main role is to design and build network architectures for Airbus customers. He is working on several innovative subjects such as EuroQCI. By joining Airbus, he realised his dream of engineering student in computing, working on innovation for a big industrial group, as he is consistently challenged to meet customers’ needs by operating cutting edge technologies and thinking out of the box, beyond the existing materiel.

Corrina Gee, UK Marketing Manager based in Newport, joined Secure Communications in May 2022. Before Airbus, she was the Head of Marketing for an SME, CDS Defence and Security. She decided to join Airbus because she wants to be part of a larger team and to be able to access the support that could be provided by a wider team. Her main role in Airbus is to predominantly look at the UK market, shaping the land demand of the British Army in line with a huge development piece around implementing the digital backbone. She develops messaging and collateral around projects she is working on, and she manages the attendance of Airbus Secure Communications in events, such as DSEI. Passionate about content creation, she looks for creating relevant and informative content which engages our audience. Currently, she is working on several projects such as LeTacCis and Proteus.

Corrina: My first day and integration at Airbus was really well handled. Being based in Newport, I was given a ‘buddy’ on my first day and she has looked out for me ever since, introducing me to other colleagues and showing me round the buildings. My manager, who is based in another Airbus site, came to welcome me and talked me through the structure of the organisation, the organisation chart, and the marketing team. In that aspect it was fantastic because I got to see the place I am working at, I got to meet people and become friends with them. I have also discovered that my team is dispersed, working in France, Germany and other sites in the UK. It is a little bit tricky when your team is not working in the same office, but the integration was really well handled. At first, I did find the distance difficult with my colleagues but I have regular meeting calls with them to catch up and update them about our different projects.

Mohamed: I was amazed and excited the first day. I have met all my colleagues as we are mostly based on the same site. Another team is based on Issy les Moulineaux, not so far from Elancourt so I do not feel the distance that might have other people in Secure Communications. During big projects, I do have to collaborate with colleagues in other Airbus sites, such as Toulouse, Ottobrunn and Friedrichshafen ones.

Corrina: No, I did not. I do not think that we have one here in Newport. But I would love to see what the other units are doing, as in Airbus there is so much different works that teams do and I’d love to learn more about it..

Mohamed: Yes I did participate in a welcome day. It was a valuable day as all entities within Airbus Defence and Space were presented. We had the chance to visit the whole site, where I discovered many different types of products that we have in our portfolio that might be quite different from my work. Thanks to the welcome day, I have also met many newcomers who were living the exact same experience. Of course, with around 2,000 people at Elancourt site, without that day, we wouldn’t have the chance to recognize who began around the same time as yourself. Since then, we are still in touch being for each other the starting core of our networks in the company.

Corrina: Definitely! Working at Airbus brings me a real sense of pride as I am now part of this huge organisation which is known worldwide. Recently, my five year old son came to me asking what I was working on, and by showing all the good stuff we have from our website (satellite, stories, space environment), he was really impressed and thought I was so cool. I think that’s one of the main reasons I came to Airbus, because of its reputation. Of course, there are many other benefits of working for such a big group, such as job stability. Having my own family now, I wanted to stop moving from job to job and find a company I would work at for the next 20 years, but that would still challenge and excite me. And I found what I was looking for in Airbus, stability, career progression, flexibility. That’s why working in an organisation like Airbus is so fantastic.

Mohamed: Yes, without hesitation. Working in such an open-minded and interesting environment does help you to give the best of yourself. Each day, I have the feeling to challenge myself. At first, I did have some concerns about joining a big group especially being lost with the strictness and the heaviness that we can feel in other companies. But it wasn’t the case with Airbus, everyone is so open-minded, casual and friendly even though we are working on sensitives and challenging technical areas. Also, we are still able to work from home, which brings flexibility to our work as transportation issues are avoided.

Like Corrina and Mohamed, apply to our open positions, and be part of an exciting and challenging adventure within Airbus Secure Communications.