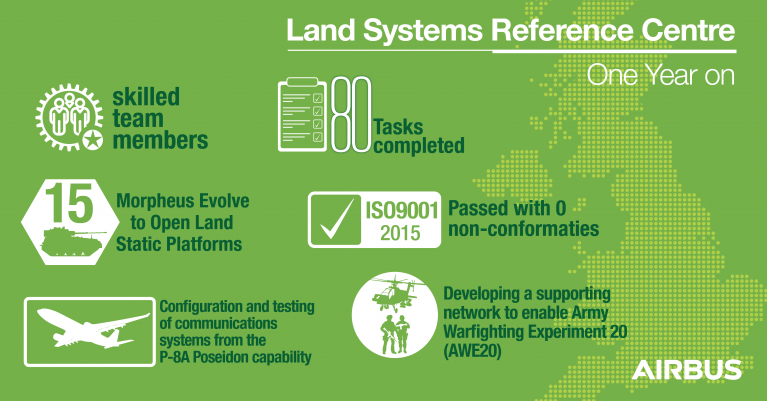 The 1st April 2020, was the first anniversary of Airbus managing the Land Systems Reference Centre (LSRC) for the UK Ministry of Defence (MOD). The contract, which is to manage, test and reference services for deployed operations around the globe, is now one-year into its 5 year duration.

Over this time, the Airbus team have received over 80 operational tasking requests and have delivered a comprehensive new service model, providing advice and testing to ensure that the MOD Networks are able to accommodate new applications, hardware and services.

One task in particular, Task 1000, required the team to support more than 200 service personnel during a cyber battle exercise, which concluded with visits from the Army Regimental Sergeant Major and Commander United Kingdom Strategic Command, General Sir Patrick Sanders.

It’s been a busy year for those working with the LSRC and over the course of the year the team have:

Adrian Maul, head of the LSRC said “Our first year running this pivotal centre has been utterly successful, but as part of 5 year contract we are very much looking forward to providing this service for the future and playing a vital role in the future of Army test and reference”

During the COVID-19 pandemic, as the centre provides a vital service to the military, it is still operating under our strict business continuity measures. However, we look forward to many more years of delivering services to support land systems testing.