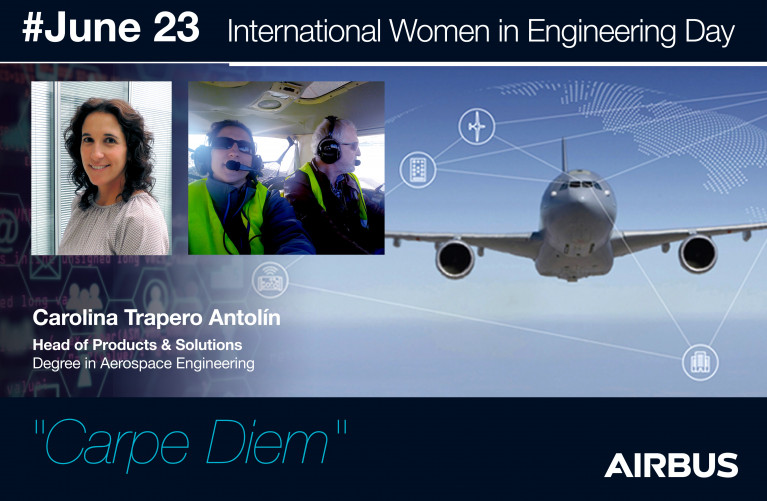 Celebrating the importance of women engineers in Airbus Secure Communications!

In February, we introduced Irene Alvarez Garcia to represent International Day of Women and Girls in Science.

In this edition, we are celebrating International Women in engineering day. In an interview with Carolina Trapero Antolín, HO Products and Solutions Center of Competence in Airbus Defence and Space, we discuss her professional background and how she thinks education shapes our mindset on gender equality.

Please introduce yourself and tell us more about your career journey!

My name is Carolina Trapero, I am an aerospace engineer and I joined Airbus in May 2001. I am based in Getafe and I am now Head of Products and Solutions in Engineering in Airbus Defence and Space.

Directly after finishing my degree at Universidad Politécnica de Madrid, I worked for 3 years on a project related to unmanned aircraft at the National Institute for Aerospace Technology (INTA) in Spain, reporting to the Spanish Ministry of Defence.

Then, I joined Airbus and before becoming a manager, I was mostly working on airborne communications system design.

Why did you want to become an engineer?

My father, a telecommunications engineer for Siemens, awoke my interest for engineering and communications since I was a child. Flying a lot in Germany, he also introduced me to the aircraft world through Lufthansa postal cards. Thanks to him, I’ve become really passionate about communications and avionics which were my specialization in university.

I felt really lucky, as the first time I joined Airbus, I was an engineer designing the audio communications system for the Eurofighter. From 2015 to 2020, I was then part of the business line team for the A400M, managing projects related to avionic systems, mainly communications. In 2020, I came back to engineering, as part of a team that is developing communications products for different business lines in Airbus Defense and Space, Military Air Systems and Secure Communications.

A mix of 7 different engineering teams are part of developing products related to communications for air, land and sea domains.

For example, for Secure Communications, we are developing products in the following projects:

Have you noticed any changes since the beginning of your studies and throughout your career?

During my father’s university time, engineering was indeed a male sector, with only 1 women in his promotion. But, by the time I entered University in 1994, as I progressed in avionics engineering, at least half of the promotion were female.

Of course, University and Industry are different, as there were generally more male employees than female employees back then, but it is changing, it is getting better.

Any advice for anyone who want to study engineering?

Be natural, confident and embrace opportunities that come to you!

From all my managers I have had in INTA and in Airbus, respect has always been at the core of the working relationship and gender equality included.

Through discussions and feedback, stereotypes about what each ‘gender role’ is, is still very present personally, while professionally I feel it has changed. This is the reason why I try to educate my children (2 boys) that a family is a team, both parents have the same tasks and there is no pre-assigned role in the household because of gender.

I am thankful to my parents who have educated me like this, and I intend to put more emphasis into that kind of education within my own family. Family is the core of society, and if we are not practicing gender diversity at home, it is going to be difficult to grow this into society.

In the last 5 years in Airbus, I’ve had 2 major job promotion opportunities. While rejecting the first one for work life balance reasons, I got a lot of feedback stating that I would not get another one as I grow older. However I proved them wrong as I was offered another promotion opportunity, and I got it. Be confident that the decisions you are taking today will not limit your future, they will always help you to build it.

No matter what abilities we have, we are all human beings and it is really important that we treat each other, and are treated, with respect. This value is my compass when managing teams, regardless its size, 8 people in my early years, and 130 people at present.

What do you think about this dedicated day celebrating women engineers, and were you aware of this initiative?

I have heard about these initiatives to value women in the workspace and I really appreciate it. However, I think, there is not enough visibility of that aspect in education, and especially at school level.

I try to join any initiative promoted by Airbus Defence and Space in Spain like visiting schools to promote our jobs, or from students who visit Airbus premises in Getafe, so that we are contributing to education in this subject: we try to get men and a women with different roles in the company showing that any gender can succeed, and that both genders are present in every type of position.

We also need to improve visibility that within Airbus, we don’t just employee engineers (men or women), we have all types of jobs, for everyone.

Despite that, equal salaries and wages are still in debate, and not only in the aerospace sector but in any professional sector (e.g: women football players).

We are progressing slowly, but we are progressing and we have to value that. Cultural changes take time, we cannot change thousands of years of history into a few decades. In Spain, less than fifty years ago, my mother could not contract a bank account on her own by law. What she was fighting for yesterday, was only for a better, fairer and equal today, and what we are fighting today is only for a better, fairer and equal tomorrow.

So even though we are pointing at gender inequality, let’s not give contradictory messages to our children. We have different abilities because we, human beings, are different, and not because we have a different gender.