EDRS-C in Kourou to be launched on Ariane 5 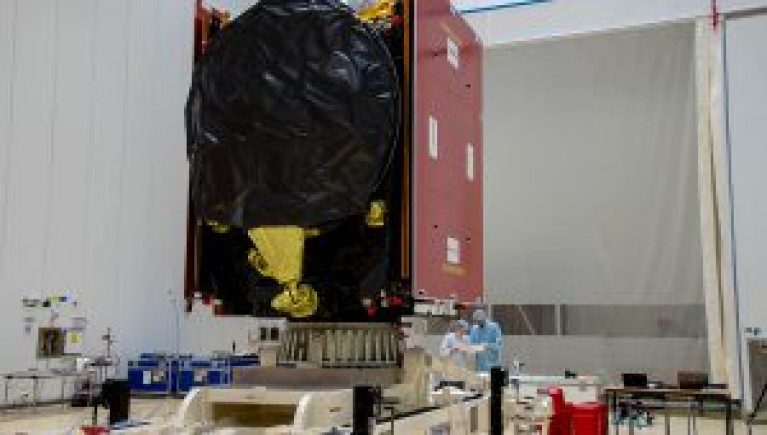 EDRS-C has arrived at the launch site in Kourou

Airbus looks forward to the launch scheduled for July 24, 2019.

Securely stowed in a container, EDRS-C has completed the first legs of its journey towards its destined place in space some 36,000 kilometres above Earth: On June 17th, the satellite was placed in the special air-conditioned container that protected the satellite during its journey from Munich to Europe’s Spaceport in Kourou, French-Guiana. “Mid-June we could approve the shipment to the launch site after the EDRC-C satellite has completed its extensive on-ground test campaign.” Says Matthias Wiegand, Head of EDRS Infrastructure. “The spacecraft has now arrived at the Guiana Space Center where the last checks before launch will be performed. Ahead of us are two major checkpoints. The first will authorize spacecraft propellant loading and the final one will be the launch readiness itself. The launch will be a very exciting moment for all of us and a big step forward for the SpaceDataHighway.”

Means of transportation included trucks and an Antonov-124 aircraft into which the containers were loaded on June 18. After a stop-over at Cabo Verde, the Antonov touched down at Cayenne airport in French Guiana on the evening of June 19. The containers arrived at the European launch site in Kourou on June 20, 2019.

Over the past months, the satellite was thoroughly checked in the course of the comprehensive environmental test campaign. These tests included space simulation chamber, in vibration and acoustic laboratories and in a CATR facility. All this is to ensure that the satellite will withstand the stresses and strains that it will be subjected to during launch and the harsh conditions in space.

The satellite is scheduled for launch on 24th July 2019 on an Ariane 5. The satellite’s operational position is at 31° East. The geostationary position allows data from LEO satellites equipped with dedicated laser terminals to be accessed by the end users in close to real time.

The SpaceDataHighway is a public–private partnership between the European Space Agency (ESA) and Airbus, with the laser terminals developed by Tesat-Spacecom and the DLR German Space Administration. Airbus owns, operates and provides commercial services for the SpaceDataHighway.