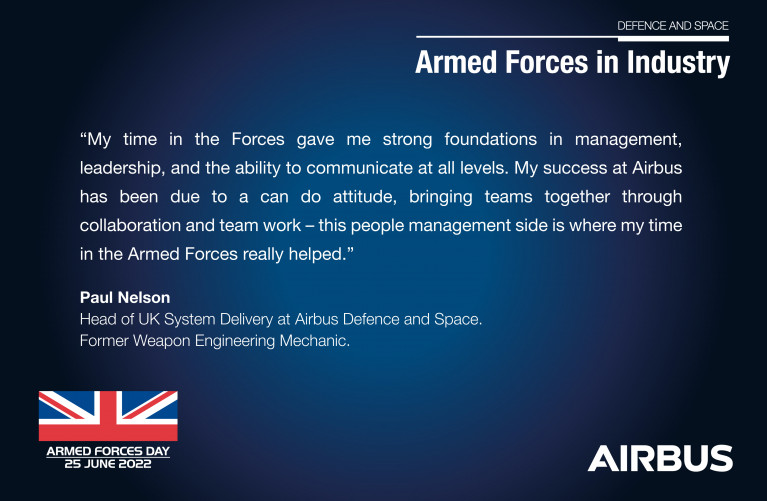 Armed Forces Week is a great opportunity for people around the UK to show their thanks and gratitude to the individuals who make up our Armed Forces, and all that they do to protect our nation.

Here at Airbus, we are incredibly proud of our relationship with the Armed Forces community. We hold a Gold level award in the Defence Employee Recognition Scheme, which recognises our commitment to employing and supporting not only service leavers and veterans, but also their families.

Here, Paul Nelson - Head of UK System Delivery at Airbus Defence and Space and former Weapon Engineering Mechanic talks about his time in the Royal Navy and the skills he’s been able to bring to industry.

My name is Paul Nelson and I joined the Royal Navy in Dec 1988. I joined as a Weapon Engineering Mechanic before undertaking the Artificer Apprentice, ‘Mech’s’ course in in 1994. I specialised in Action Data and Information Systems, Networks, Comms and IT. I served on HMS Ariadne, Scylla, Glasgow and Manchester.

After 22 years, I felt it was time for a new adventure. I had a decision to make, either extend for a further 10 years or try something new. I was at a new juncture in my life so decided on a new direction. The RN had changed so much in this time and the deployments were becoming longer and harder and work life balance was difficult.

After a number of roles in industry, I moved to Airbus Defence and Space, and it has really provided me the opportunity to be challenged and grow. I have held some key roles in the organisation and now I am currently the Head of UK System Delivery for End to End Mission systems within Connected Intelligence. I have a team of 100 people serving contracts in the UK, US, Asia Pacific and NATO.

The Royal Navy gave me strong foundations in Management, Leadership, and the ability to communicate at all levels. My success is due to a can do attitude, bringing teams together through collaboration and team work. I really enjoy the people management and this where the RN really helped. As a functional manager the training, the complexity and proximity of living and working together and working as a team was how we succeeded together and I carry this forward in my everyday work.

I’d tell anyone at the beginning of their transition journey, to not be afraid to make a change. Industry opens up a whole new chapter in your life and huge opportunity. I found it difficult to transition from a Military life to a new career in the commercial world, but with time and support you will quickly adapt.

You have the skills and leadership which stand you in good stead for the journey ahead. It is important to have a leaving plan in mind, tailor your resettlement to the role you seek. It maybe that you find a stepping stone as I did before finding your new long term career.