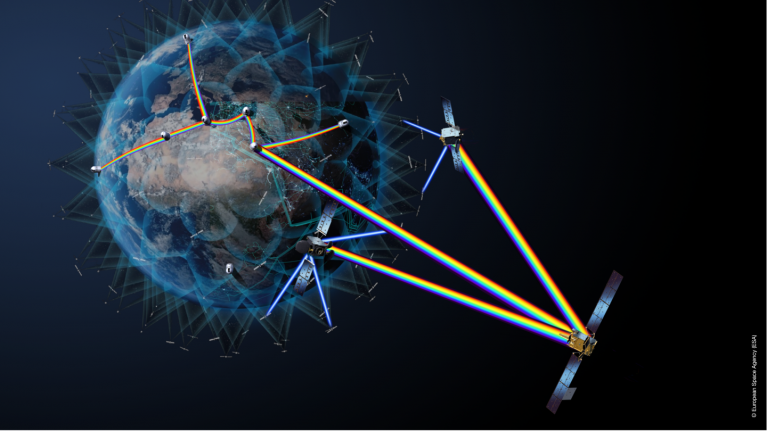 Airbus Secure Communications is contributing to this first HydRON milestone not only by leveraging on its EDRS experience but also for enabling completely new service offerings based on optical terabit-per-second capacity supported by a seamlessly integrated network topology between space assets and the optical ground network.

Airbus and partners have been awarded two laser-communication projects related to HydRON on behalf of ESA.

The past years have seen an unprecedented rise in the volume of data streams that circle the globe. Terrestrial communications infrastructure is quickly expanding worldwide to meet the ever-growing demand. However, terrestrial fibre-based networks depend on intrinsically point-to-point implementation of suitable infrastructure – often involving expensive earthworks and construction – and thus neglecting less populated/developed areas almost completely. Laser based satellite communication has the potential to help bridge this digital gap for a variety of applications such as television broadcasting, internet and phone services, virtual private networks over satellite and the like.

Airbus Defence and Space and partners Tesat, Fraunhofer HHI, Fraunhofer FOKUS, DLR-IKN, ADVA and COLT recently kicked-off two projects to A) develop a System Simulator Testbed and B) study the implementation of a HydRON Demonstration System. The Telecommunications and Integrated Applications Directorate [TIA] of the European Space Agency (ESA) is funding both.

The demonstration system study (Phase A/B1) will last 18 months to propose an implementation concept for an end-to-end demonstrator of the HydRON vision, tentatively composed of two space-based laser communication payloads in LEO and GEO, interconnecting with each other, several optical ground stations and the terrestrial fibre optics network.  Key objectives of the study will be to:

Study completion by mid-2023 shall serve as the technical and planning basis for the subsequent HydRON demonstration system implementation phase (Phase B2/C/D/E1) with a launch in 2026.

The consortium has been awarded a second contract to develop a HydRON System Simulator Testbed to: