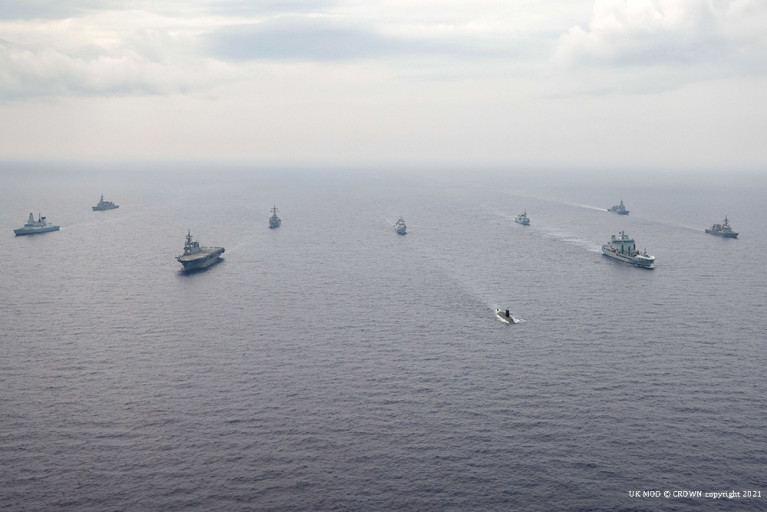 Airbus is delivering the primary satellite communications to the UK Carrier Strike Group 2021 (CSG21) which set sail in late May 2021 until the end of the year on its inaugural maritime deployment. This is the most important UK Royal Naval deployment in a generation.

Led by the Royal Navy’s HMS Queen Elizabeth carrier, the UK Carrier Strike Group was deployed to the North Atlantic, through to the Mediterranean, Indian Ocean and on to the Indo-Pacific. The strike group has undertaken a range of operations and training with allies and partners, including maritime missions with NATO in the Mediterranean and Coalition operations in the Middle East and Far East.

Airbus worked closely with the Navy Digital and Defence Digital in the lead up to the deployment to ensure the most efficient and effective communication plans were in place to support the UK elements of the task group.  This included extensive scenario testing.

Extensive work was undertaken prior to the deployment by Airbus engineers on-board the various platforms whilst in UK dockyards to ensure the UK platforms in the group were provided with the latest communications upgrades available.

This included provision of the latest rollout of the Airbus Maritime Network Evolution (MNE) capability enabling the CSG21 platforms to take advantage of multi bearers of opportunity (BOO), including MilSat, ComSat, Ship alongside, Wifi, and 5G whilst at sea or alongside in port.

Primary satellite communications support for the group is provided over the Skynet 5 satellite constellation anchored via the Airbus UK satellite ground stations at Oakhanger and Colerne, and also Airbus’ Australian anchor station in Adelaide.

Richard Franklin, Managing Director of Airbus Defence and Space UK said: “This global integrated deployment has fully proven Airbus’ ability to provide critical secure satellite communications operational support for this multi-domain UK task group across the world. We were equally pleased to work with our industry partners in commercial satellite communications to deliver the most appropriate meshed solutions to this deployment ensuring information superiority could be maintained at all times. Skynet 6A, now in production, will provide seamless continuation of this world class capability.”

Day-to-day support of satellite communications services is coordinated and controlled by Airbus teams in the Skynet Hawthorn Network Operations Centre.

The CSG planned to cover over 40,000 nautical miles during its inaugural deployment.  The aim of the CSG is to facilitate carrier-enabled power projection (CEPP) in support of the UK’s interests. As a self-contained force, it is capable of operating independently or as part of a wider operation.

The task group, as well as UK maritime ships, was joined by USS The Sullivans and Royal Netherlands Navy HNLMS Evertsen. F35B Lightning II aircraft provided from both the UK and US have been embarked on board HMS Queen Elizabeth during this deployment.

The Skynet 5 programme, managed by Airbus, has provided the UK MOD with a suite of highly robust, reliable and secure military communications services, supporting operations in Iraq, Afghanistan and the Balkans. The programme commenced by using the legacy Skynet 4 satellites and then augmenting them with a fully refurbished ground network before launching the Skynet 5A, 5B, 5C and 5D satellites between 2007 and 2012. Through the many years of Airbus delivering an exceptionally reliable Skynet service the programme has reduced or removed many of the technical and service risks for the MOD, whilst ensuring unrivalled secure satellite communications to UK forces delivering both operational and information advantage at the greatest time of need.