What is the quantum technology?

Last year, the European Commission selected a consortium of companies and research institutes, led by Airbus Defence and Space, to design the end-to-end architecture of the EuroQCI (European Quantum Communication Infrastructure).

“Quantum technologies leverage on quantum physics properties to provide disruptive solutions for processing information, exchanging data and interacting with the world around us”. Quantum computing, Quantum communication and Quantum Sensing are three quantum pillars with the potential of impacting the aerospace sector.

Quantum computers represent a new and different type of machines that encode and process information as quantum states. Such quantum computers are able to solve, in record time, problems that are very hard or unsolvable with traditional computers.

Although they are not yet fully operational, Quantum computers have the potential to simulate complex systems and optimize multi-domain problems, which is exactly the kind of challenge encountered in the aerospace domain. “By using quantum computers, we can further improve our systems and reshape the way they look today”.

Airbus Defence and Space is aware that for exploring and achieving quantum advantage in the aerospace domain, close cooperation with the quantum computing community is mandatory. Airbus has been a pioneer in quantum computer benchmarking, teaming up experts from engineering and flight physics with leading academic and industry experts in Quantum Computing. “By bringing different actors together, such as academics, quantum computer experts and software providers, we create an environment where we can further advance on the quantum advantage for aerospace.”

Quantum sensing has a strong impact on different industries. It uses quantum states to measure a wide variety of properties, including acceleration, rotation, electromagnetic radiation, magnetic fields, time and frequencies. “Quantum sensors have the capability to reshape a wide variety of services. They have the potential to out-perform current classical sensors in terms of accuracy, sensitivity and drift”.

“This is the most mature quantum technology, being quite evolved and with commercial products already available (e.g., Quantum gravimeters) and there are first projects on the path to mass production towards solid state quantum sensors.

Quantum physics has the potential to change the face of future secure communication, as well as make quantum internet a reality.

In order to provide quantum communications, new network infrastructures are needed. This includes not only the development of a new physical layer of the network that integrates devices and links able to deploy a quantum channel, but also the development of classical network layers for controlling and managing quantum communication. Quantum networks integrate terrestrial and space segments, using terrestrial fibre optic communication networks together with satellites gateways for ensuring full coverage across the EU and other continents.

Airbus Defence and Space has a leading role in the system design, development and deployment of the EuroQCI, the future quantum communication network of Europe. It will secure Europe’s encryption systems and critical infrastructures such as government institutions, air traffic control, healthcare facilities, banks and power grids against current and future cyber threats. Airbus Defence and Space is participating in two projects of the EuroQCI roadmap.

Post-quantum cryptography relies on developing crypto algorithms that are difficult to break with both traditional and quantum computers. These algorithms are not only able to distribute secret keys, but can also encrypt and sign information. They have been the target of wide exploration and standardisation efforts during the last decade. The National Institute of Standards and Technology (NIST) already selected four post-quantum algorithms for inclusion in the NIST standard.

“While post-quantum cryptography are just some algorithms that can be deployed in our current devices and infrastructures, it is expected that they will have an impact on the end-to-end performance of different applications. Thus, a plug-and-play transition towards post-quantum is not evident and might cause a degradation in some of the specifications of our products and services”.

In the next article, Johanna will explain how the specificity of post-quantum cryptography secures the exchange of data, as well as the main role of quantum-secure communications in the European quantum internet.

Johanna Sepúlveda received her M.Sc. and Ph.D. degrees in Electrical Engineering – Microelectronics by the University of São Paulo, Brazil. She was a Senior Researcher in the area of security and emerging technologies at the University of South Brittany (France), INRIA (France) and at the Technical University of Munich (Germany). Currently she holds a position as the Airbus Expert on Quantum-Secure Technologies, being Chief Engineer of different quantum initiatives such as EuroQCI. Also she is a member of the Strategic Advisory Board of Quantum Technologies for the European Commission and leader of the Quantum Strategic Industry Roadmap at QuIC (Quantum Industry Consortium). She has more than 15 years of experience in R&T and R&D in the area of security, networked systems, HPC and quantum technologies. 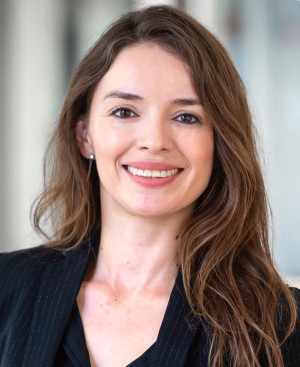